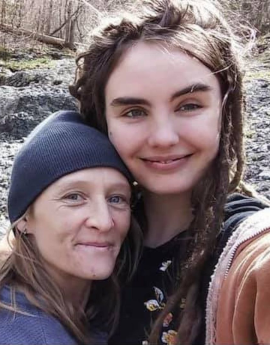 Recently married couple, Kylen Schulte, 24 and Crystal Turner, 38, are captured on video leaving Woody’s Tavern in Moab, around 9:00 p.m. on Friday the 13th of August, 2021, with two of their friends.  These are the last moments the world will ever again see them alive.   At some point afterward they bid those friends a goodnight, and returned to their rustic campsite off of La Sal Loop Road in the La Sal mountains, about 40 miles east of the city of Moab.

When the couple had not made contact with anyone after 3 days, they were reported missing on August 16th, by Turner’s co-workers at McDonalds.

A search was begun by the Grand County Sheriff’s Department, who failed to locate the couple or their vehicle and camp site.   Friends and acquaintances began searching on their own for the missing couple, loosely organized through posts on social media. Kylen’s father, Sean-Paul Schulte, who resides in Helena, Montana, contacted Kylen’s friend, Cindy Sue Hunter, of Moab, on August 17th, after he had heard from their other friends that Kylen and Crystal were considering moving their campsite after discovering some “creepy guy” at or around their campsite. I’ve read in some reports he was a “creepy guy harassing” them.  Exactly what they meant by any of this is either not known at this time, or was not being released by their friends, family, or local law enforcement. My enquiries went unanswered.

At the urging of Sean-Paul Schulte on August 17, and feeling compelled by an inner urgency of the necessity to find her friends; Hunter headed out on August 18th, on a blind search to try and locate the area where the women were camped.  She began her search at the Moab McDonalds, where Crystal Turner worked, finding a van and a motorcycle owned by the couple and parked there, before heading off into the La Sal mountains to continue her search. (As reported in the Moab Times Independent)

According to Hunter, working solely on an inner gut feeling that led her search, and while on the phone with Kylen’s father Sean Paul, she discovered their car at a secluded hidden camping spot in the vicinity of Whispering Oaks Ranch, off of La Sal Loop Road.  She then discovered Shulte’s body near-by, informing Sean-Paul before calling The Grand County Sheriff’s Office.  She also discovered the couples pet rabbit, Ruth, alive, but hungry and dehydrated, having been left in the couple’s car at the campsite. Hunter waited at the scene for the sheriff’s officers to arrive.  It was they who then expanded the search there and discovered the body of Crystal Turner a short distance away.

Since that time, the Utah Bureau of Investigation, and the FBI have entered to assist in the case.  Why the FBI?  Perhaps due to the fact that Kylen and Crystal are a lesbian couple and some are speculating that this is possibly a hate crime. However, there is no indication so far that is the case.

2 thoughts on “Murder in Moab”